Thomas Edwin Hill was my grandfather and through documents I have I can try an illustrate what you can achieve with tracing his life.
I was lucky as my mother kept a few documents, so I started with looking for his death certificate. That told me what he died of, where he died and his age and date of birth. I needed to confirm his date of birth so I went looking for his birth certifcate, which I didn't have. I looked on the internet for our local Births, Marriages and Deaths, which in my case was Staffordshire BMD. I found a likely record and applied via , the internet for a copy about 7.50 GBP. The birth certificate came through, with an exact match, and it gave his mothers name, (Maiden) and fathers name. He was born in 1886.
So where to go next.........

Moving on from getting the Birth Certificate

1886 - Thomas Edwin Hill ( My Granddad ) is born on 28th August 1886 at 13 Garden Place, East Vale, Caverswall, Stoke on Trent. East Vale is now Longton.
His parents are shown in the 1891 census.......
1891 CENSUS - His parents moved to Wain Lea, Harriseahead, but his dad has a new job as a coal miner. William now aged 17 becomes a coal miner. Mary and Annie are at school, but there are 2 more family members, Thomas, aged 4 years (Grand-dad) and Alice aged 1.
1901 CENSUS - The family have moved to 27 South Street, Ball Green, Stoke on Trent. Thomas has now gone back to farming, Annie has become a Bosson, young Thomas, now 14 has become a miner. There is a new family member Miriam aged 9 years. William has now married and lives at 7 High Street, Mow Cop and has a 1 year old daughter Mary E. and son James 3 months
In 1901 Thomas is now 14, so you can presume that in a t least 5 or even 10 years time, he may be getting married ! - There are no more census details available Does he get married ?

Well not quite, he joins the British Army, which means you now may be looking at developing your research further.
1904 - Thomas Edwin Hill - now Soldier 20841 Signs up for 3 years in the colours and then 9 years in the reserve on 8.9.1904 to report to Lichfield barracks on 9.9.1904 at 10am.
He leaves the Army and is now a reservist for a further 9 years....
There is a marriage and I have the marriage certificate, which has more information on it...
1908 - The Parish Church, Norton in the Moors, on 5th July, sees the marriage of Thomas Edwin Hill a 21 year old collier to Elizabeth Ellen Fallows, 18 years. Witnesess were Alice Mary Hill, Willian Henry Hill and Richard George Fallows

1911 Census Now married for 2 years and living at 7 South Street, Ball Green, Norton in the Moors. It has 4 rooms, which would be know as 2 up, 2 down. Thomas is still in the mining industry. They now have a family,Thomas Richard Hill, 2 years and Edwin Arthur Hill, 2 months.
1914 - 113 Heavy Battery, RGA formed at Woolwich on 26 Sept 1914 and was armed with four 4.7" Quick Firing Guns. It went to France on 3 Oct 1914 and landed at Havre on 4 Oct 1914. On arrival it was attached to II Corps Heavy Artillery. It came into action on the Neuve Chapelle front and took part in the battle of La Bassee, opening fire on 26th October 1914, exactly one month after its date of formation. It remained in that area until the end of November 1914. II Corps then moved to the Ypres front and the battery was transferred to the Indian Corps.
1915 - The 7th Division was formed during September and very early October 1914

Thomas served in the Royal Garrison Artillery from 1904 to 1907, when he went on the reserve list for 9 years. He was a reserve gunner in the RGA at the commencement of World War One and went to France in August 1914. He sent postcards home and below is an example of an embroidered one. It was stuck in an album, so hiding the writing on it, i.e. the second example.
These cards capture the mood at the time and it is dated 1916 Card sent during World War One Well I have been trying to find out for a long time, as his pay book seems to suggest that was in he Royal Garrison Artillary, at Number 9 Stationary Hospital, which I know was at St Nazaire in France in 1914. He wasn't injured, so why was he at the hospital..I think he was staioned at the hsopital to guard it, n his role as a gunner.
I hav ebeen done to my local library and found his medal record on the internet and in 1914 he was attached to a statioanary hospital, not injured, I'll keep looking... Medals Record for Thomas Edwin Hill 1914
In 1916 does he think things are getting a bit bad, and as a result makes a will: 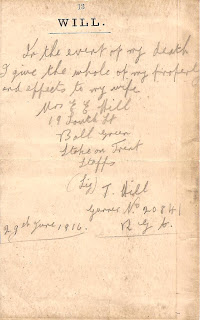 What it does tell us is where the family are niow living, and that is 19 South Street, Ball Green, Stoke on Trent, Staffordshire.  He does survive the war as this document shows: 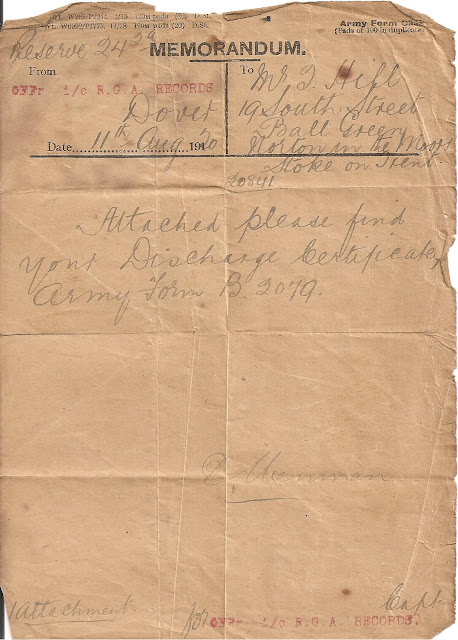 The story so far - Looks like they are at Ball Green in 1920 and there is a gap until they move to 1 New Bulidings, Black Bull, Knypersley and buy the house which has a shop.... 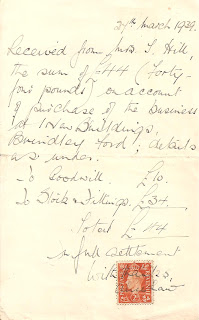 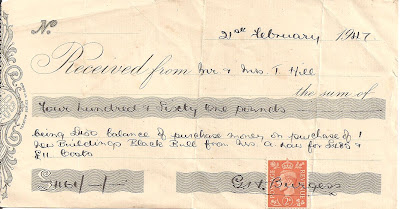