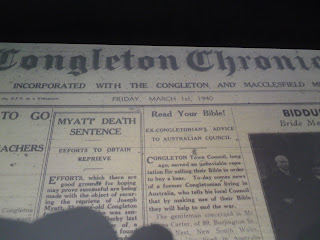 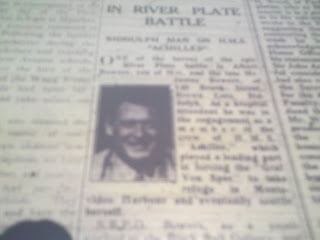 Through the power of the internet and the web site www.nigelbowers.co.uk I have been in touch with some more relatives.  This has inspired me to do some more research, so I have been back to thge local library at Congleton, Cheshire, United Kingdom and looked up the article featured on the left about Albert Bowers.
It was on microfish, bit of a strain to read, but here goes:

It is from the front page of the Congelton Chronicle, Incorporated with the Congleton and Macclesfield Mercury.....

Some more info on HMS Achilles
Whilst I was at the library I had a browse of the paper and if you fancied a night at the pictures you could go and see:
At the Premier
Hound of the Baskervilles
Starring Basil Rathbone
At the New Cinema - Royle Street, Congleton
The Magnificent Fraud
Starring Akim Tamiroff and Lloyd Nolan
Howver if you wre ill and suffering from influenza doctors, according to the advert were recommending OVALTINE....
Posted by Unknown at 9:11 AM